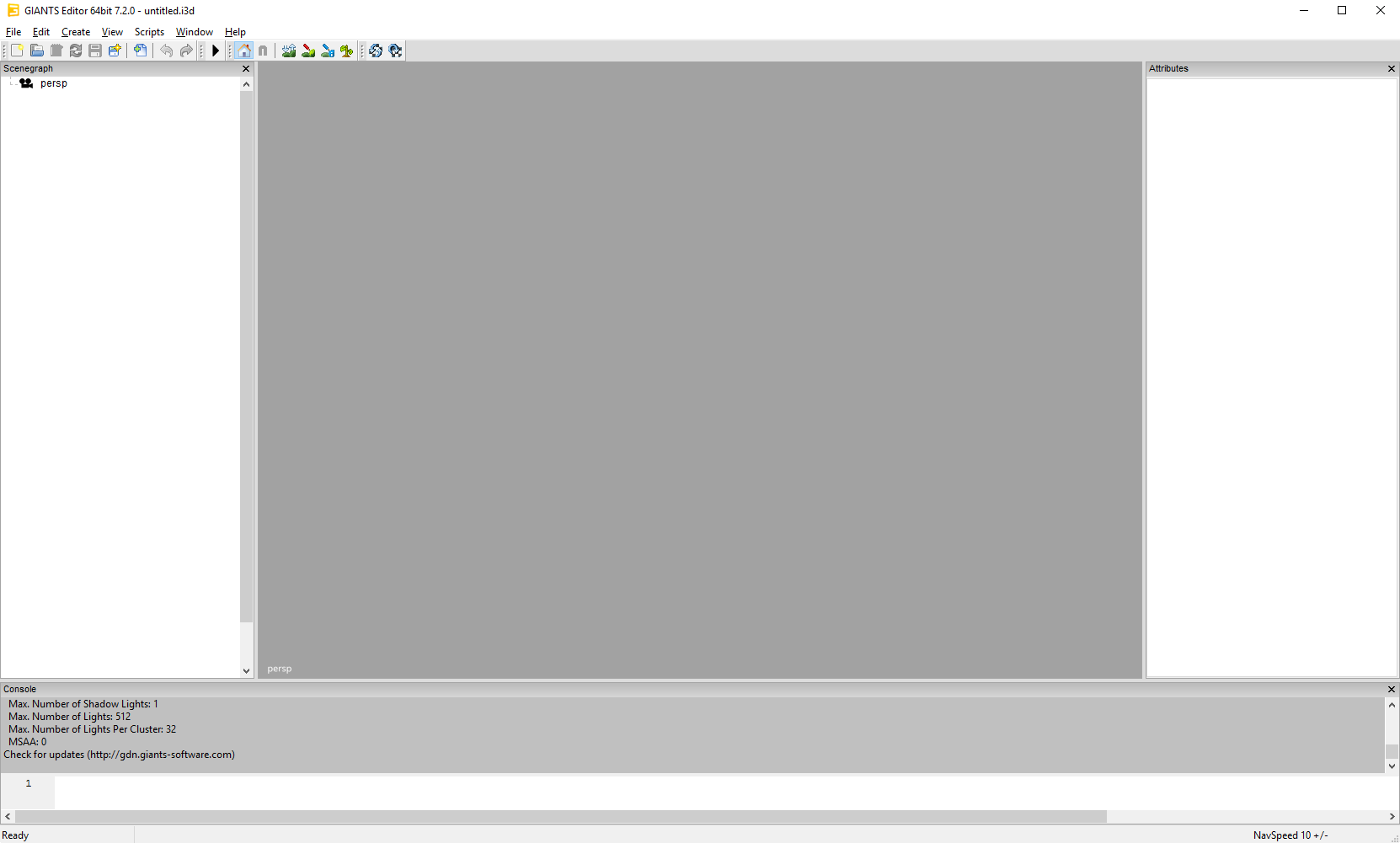 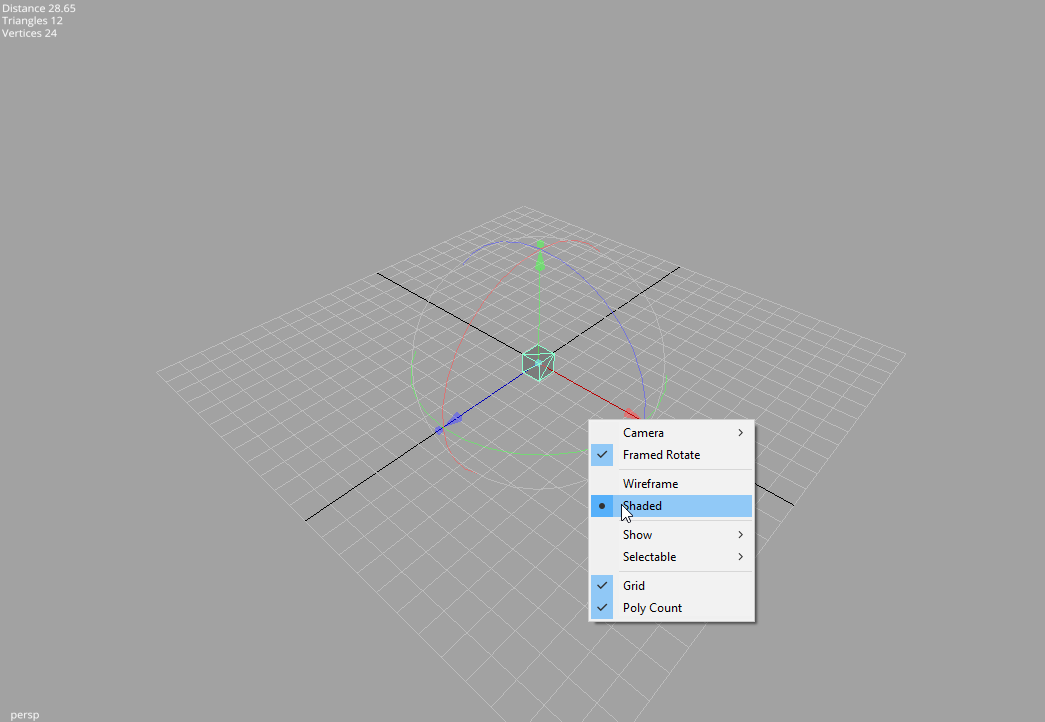 The navigation is quite like in Maya. If you have nothing open in your editor I suggest you quickly open a simple i3d file otherwise you won’t see much of an effect. If its to dark in your scene just create a light by going to Create–>Light.

If you don’t have a middle mouse button, you can press LMB and RMB instead.

By simply right-clicking into the viewport panel you get the View Options. Sometimes it’s useful too use different cameras in a scene. You can create them once and then with the View Options you can choose the camera to view at your scene from different angles quickly.

You might notice that if you rotate, the camera is rotated. If you have a big level this behaviour is very useful, but if you want to look at one particular object this can be quite awkward. To change the rotation to Framed Rotate you first have to select your object either by clicking on it directly or by choosing it from the scene-graph and the framing the selected object by pressing the F key. Now you can simply click (RMB) on the screen to open the View Options and choose Framed Rotate. Now the camera is rotating around your last framed object.

If you have large scenes, you can toggle the visibility of lights, audio sources, physics and the cameras by checking them on the show submenu.

You can also use the Selectable submenu to toggle whether you can select lights, audio sources or cameras.

Furthermore you can toggle the grid and the polycount on and off.

Profile gives you the ability to choose different hardware profiles adequate for your system.

Debug can be used to find errors (e.g. on your 3D model)

A very useful feature of the GIANTS Editor is the scenegraph. If you don’t have it on the screen, just go to menu window and hit scenegraph. It is basically the same you have in Maya. It shows all objects you have in your scene and also the parent-child relationship between your objects. 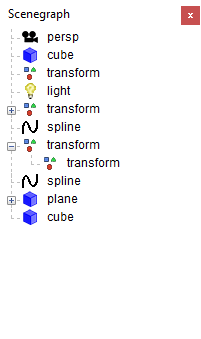 Let’s just make a little scene with some Transform Groups. The Transform Group is the basic building block of your scene. You can use a TransformGroup to move all the attached objects just by moving the Transform Group since the children inherit the transformations of the parent. To create a new Transform Group go to Create and hit TransformGroup. Now you can see it in the Scenegraph, its name is transform. To change the name just select it and go to the attributes panel. At the very top of the panel you can choose the name of your object. Make two TransformGroups and name them Parent and Child. If you move them around you see that their transformations are independent, the movement of the parent doesn’t affect the child. Now let’s make the appropriate relationship between the two. Select the child in the scenegraph panel and go to Edit->Cut. Now select your parent and hit Edit->Paste. Additionally by pressing MMB on the child, dragging it over parent and releasing MMB, the same as above will happen.

As you can see now, the child is now connected to the parent. If you now move around the parent, the transformation of the child is affected too whereas the child can be moved around without affecting the parent.

There can be 6 types of objects in your scene: Triangle Meshes, Splines, Cameras, Transform Groups, Lights, Terrains and Audio Sources.

It is also possible to use CTRL + C to copy objets, CTRL + X to cut objects and CTRL + V to paste objects. Notice that pasted objects are always children of the currently selected object. If you want to paste an object on the highest hierarchy level of the scenegraph be sure that nothing is selected in the scenegraph. This can be achieved by clicking at an empty space in the scenegraph panel. 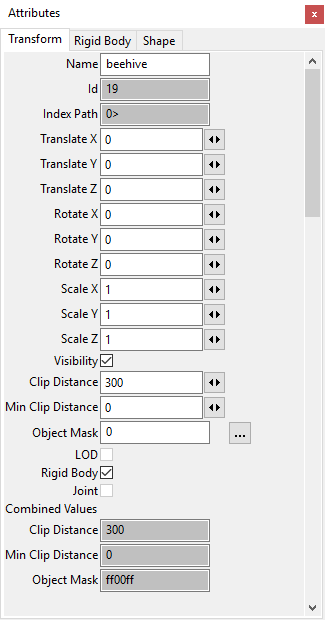 The toolbar looks like this. If your pointing on the icons with your mouse, a text with the functionality of the tool is displayed.

Let’s quickly go through them from left to right.

File Operations
History
Physics
If you hit the play icon, the physics will simulate.

Grid Snapping
Use this option to snap objects to a predefined grid. 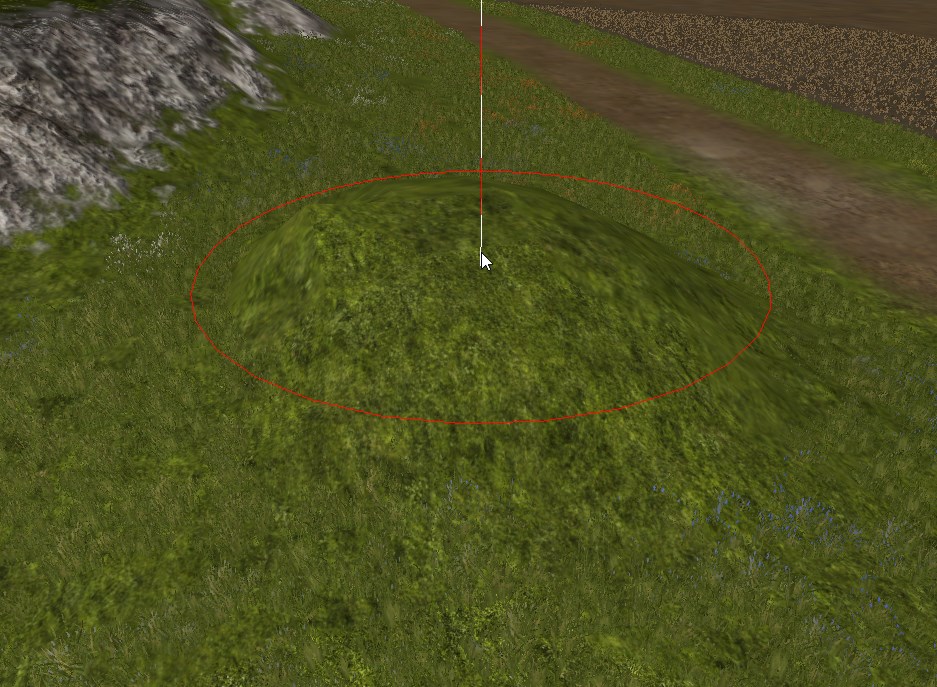 To test the terrain sculpting, just open the terrain test scene. Now you have a terrain to play with. Open the terrain editing panel with window->Terrain Editing. (If the scenegraph panel is still open it might cut off a bit, just close it to get more space.)

If the terrain sculpt mode is active now, you can rise or lower the surface of your terrain by using RMB and LMB. MMB can be used to smooth and the value defines the force with which you pull or push. What happens here is, that you are painting a height map, that defines the height of each point of your terrain by giving it a grey-value. The attributes Opacity, Hardness and the Value are defining the "brush" you are painting the height map with. Just play around with the setting. You can change the radius of the brush with the shortcuts "V" and "B" and you can change the opacity value of the brush quickly with "N" and "M".

With the Terrain Foliage Paint Mode active, you can paint your foliage onto your terrain, it`s the same thing as if you would paint onto your terrain - not with a texture but with foliage. LMB adds foliage, RMB removes foliage. 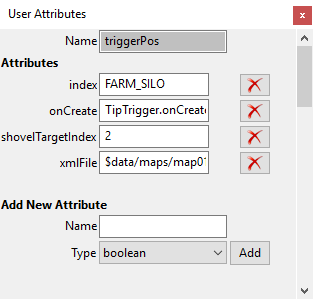 The user attributes panel is typically not visible if you open the editor for the first time. So go to Windows->User Attributes. Select an object in the scenegraph to see its user attributes.

User Attributes can be defined in the editor and then be used in the engine (eg. within a script). This enables you to define object specific attributes for every object in the scene.

You can preview animation sets with the animation panel.

You can edit splines by picking a control vertex (CV) of a spline an moving it around. Delete or insert new control vertices with the keys delete and insert.

Here you can execute script snippets. With ENTER, you can add new lines. SHIFT+ENTER will execute the code in the text field.

Type in the following:


print("hello world from the GIANTS Editor");


Then hit SHIFT + ENTER and the string is printed out above.


The scripting can be useful for many things. For example you can run this script snippet to test the fog settings in an i3d scene: 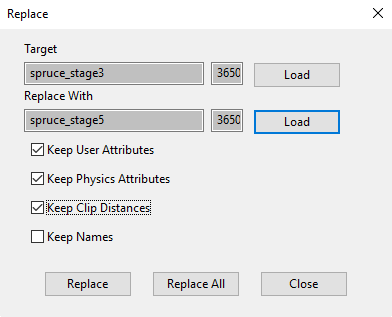 Note: replace all does only work with single objects, but not with hierarchies of objects, however the single replace function works.
This feature is quite useful because you can use it to substitute an object reference feature within your i3d scene file.

This is a really nice feature of the editor, you should try it at least once!
To place an object on the surface of another object, you can simply select the object you want to place and then press CTRL + B + LMB, while pointing at your desired location. The selected object will then instantly be set to the location you’ve chosen.

Hint: you can do this with all your objects within your scenegraph and also with the camera or light sources. E.g. you can select the current camera and then place the camera at a location far away, allowing for fast relocation of the camera.

If you keep the LMB pressed and hit SHIFT or CRTL you can clone the selected object at the currect mouse position. SHIFT will just clone the object while CRTL will add a random rotation in the Y-axis. (Useful feature if you want to create a group with hundreds of randomly rotated objects like a forest)

Edit->Move to Camera: Moves the selected object in front of the current camera

Navigation Speed: Moves the camera faster or slower. Use - and + to ajust the speed.